You are here: Home › Blog › The LSD Flock 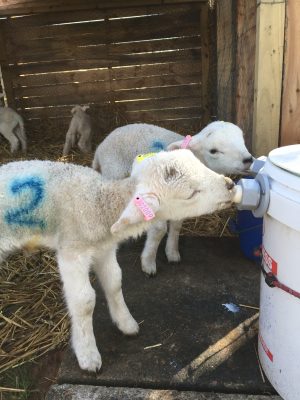 This is how it starts.

Orphan lambs.  Rarely true orphans.  Usually a triplet (the mothers can’t support all 3 so one triplet is removed to the orphanage) or a twin off a first time mother.

After a bit of coaching, the orphans learn to drink off the shepherdess.

The Lsd staff take shifts in filling up the shepherdess and giving some TLC.

Number 2 indicates this lamb was from the second ewe to give birth this year. 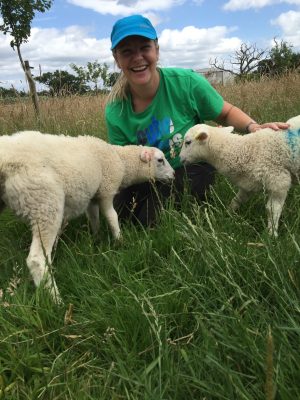 Once weaned off the shepherdess, the orphan lambs are mostly returned to the flock.

All except the ones that have become too attached.

This is Daft Lamb and 120.  Daft Lamb was found 2 fields away from any other sheep in a highly disoriented state.  We didn’t know if she would survive.   The mother rejected her when we tried to reunite them.  So she joined the orphans.  And ultimately the Lsd flock who take in all waifs and strays.  She is doing great now.  Still a touch daft.

120 is Katja’s lamb.  Katja came over as a volunteer from Germany to help during lambing.  She made us promise to adopt 120 who followed her everywhere. 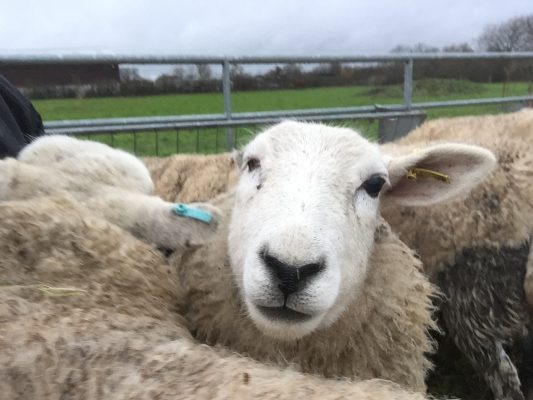 Pecky was being born in the field at about 6am when help arrived.  The lamb was being attacked by a crow.  The mother was struggling to lamb and could do nothing about the crow.

The crow had pecked a hole in the lamb’s head.

Rush Farm did an amazing job of saving this lamb.  Although successfully reared by his mother, Pecky was super tame due to all the human support so of course, became a member of the Lsd flock.

(The kids usually name the sheep.)

Pecky is doing fine, he only has one ear and one functioning eye but is as soppy as anything and loves fuss. 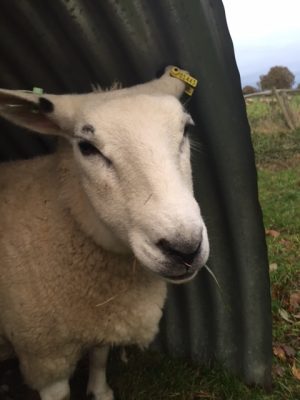 Our latest addition – our flock is now 11.  We’ve called her Audrey Hepburn.  Davinder is mortified, Audrey Hepburn is her favourite actress.
Audrey is an orphan from last year who seems to have found her way back into the LSD flock, so it was obviously meant to be. 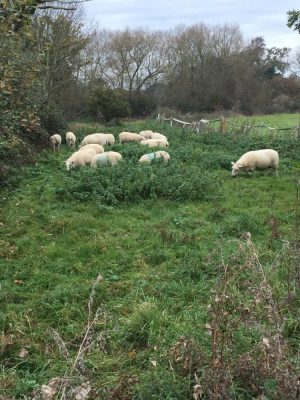 This picture was taken yesterday.  The sheep had spent overnight in the barn after worming.  We let them out yesterday and after a night in the barn on hay, they were just delighted to get back to grass.  The two with the blue marks on them are this year’s lambs.  We kept 3 lambs from this year – Daft Lamb, 120 and 44.