One of the moorhens has built a precarious nest on the kids’ raft from a few years ago. 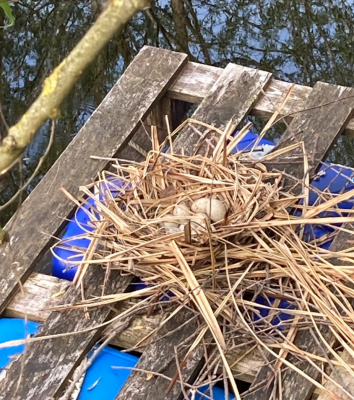 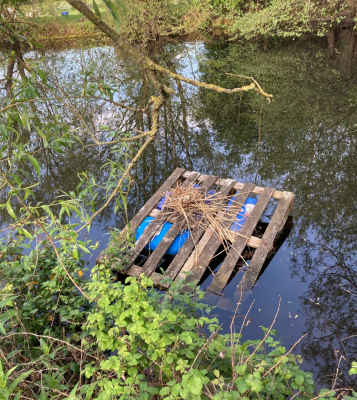 1984 and her lambs are still doing well. 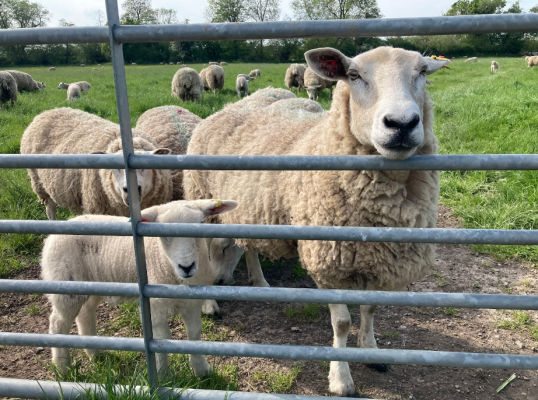 The ewes are being moved regularly from field to field.

As soon as we walk in she comes running over … and then all the ewes come running over making a racket and giving the game away. You can’t sneak pellets in to this field.

52 has ripped his ear tag out. It’s quite gruesome. 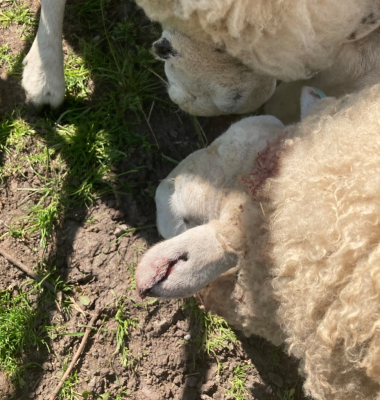 So he’s been squirted with anti-biotic spray to stop it from getting infected. 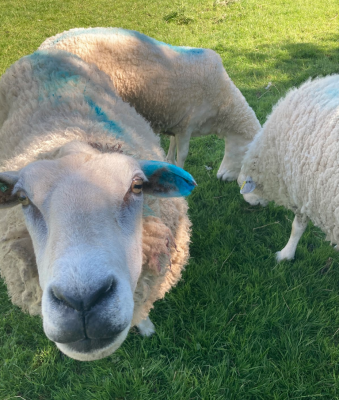 There was little reaction to the spray (which normally stings) so perhaps the ear doesn’t hurt.

Sadly we are down to 6 guinea fowl and there are reports of a pile of feathers up towards the woods from The Bee Man. 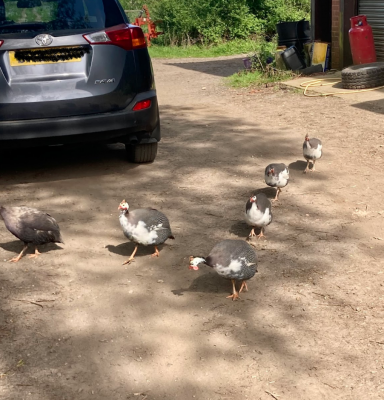 Finally, 1984’s female lamb submits to being stroked. The lambs are not tame just because the mum is. It’s been over a month. 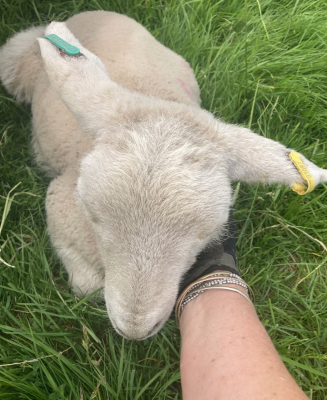 The sheep shearing course at Kate Humble’s farm in Monmouth.

Wow, it was hard.

First, we learned how to tip a sheep. It is as hard as it looked on Jeremy Clarkson’s Farming series.

After several demonstrations, we each took turns to shear one half of a sheep. Then the other half (of another sheep). And after lunch and under close guidance and constant correcting we sheared a whole sheep. 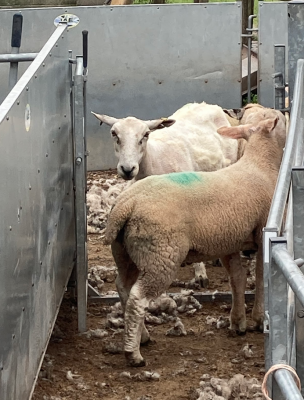 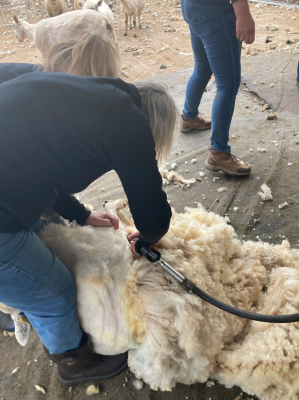 It was terrifying. It was exhausting. It was so difficult – the shearers make it look easy. But holding the sheep in position takes all your strength and you then have to manipulate the clippers. And the sheep knew we were incompetent and constantly tried to escape.

Ill prepared as we felt we gathered our flock for shearing. 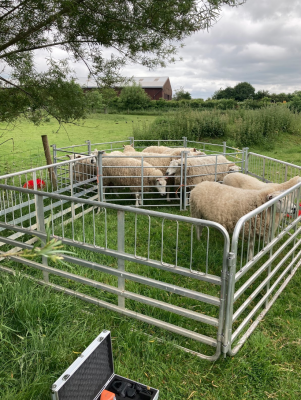 And unbelievably got 6 of them sheared. No dreadful cuts, no heart attacks which apparently can be a thing if the sheep get too stressed. And the sheep seemed happy enough with us afterward. The technique was somewhat lacking but the job got done. 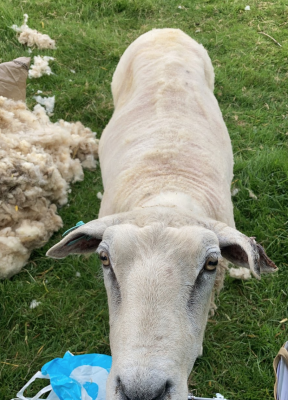 Today we are shearing Jill’s flock. Jill has a similar-sized flock of orphan lambs that have been hand-reared and become pets. 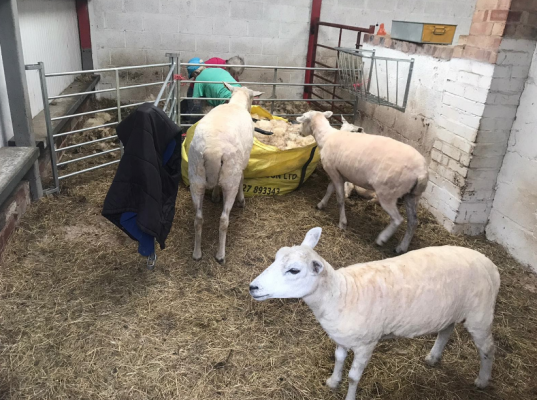 I must give huge thanks to Jill without whom I would have given up on Friday, Saturday, and Sunday.

The clippers themselves are terrifying. 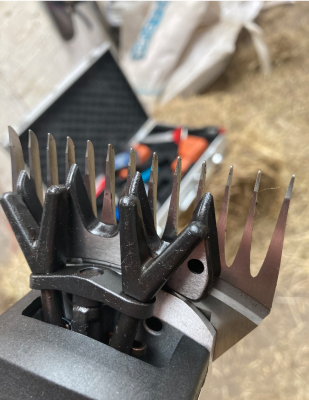 Back to finish shearing the rest of the Lsd flock who clearly bore no hard feelings to Jill as they nosed through her bag for any lunch she might want to share with them. 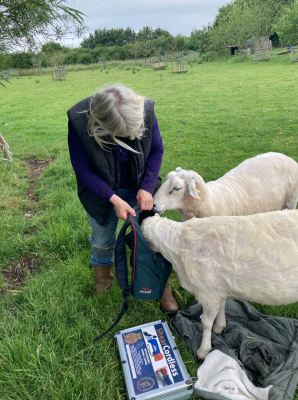 52 was a gem – of course he was. His separated ear from where he ripped out his ear tag has healed nicely. 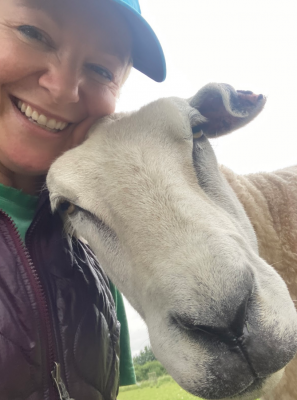 And finally this month’s blog is dedicated to Flash who we will miss enormously. She used to be a regular visitor to the office and howl for her treats. She once nibbled on a piece of frozen sirloin destined for the White’s Christmas dinner table. And loved sitting in Lesley’s passenger seat. 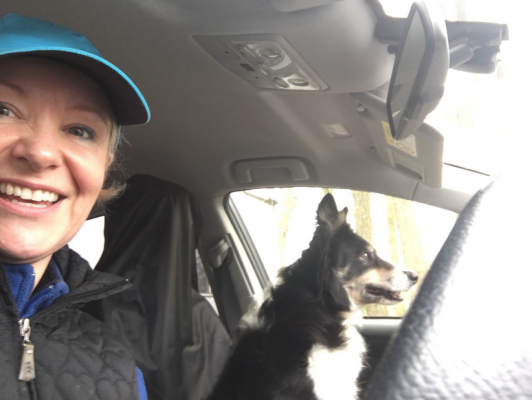