Oddly Bramble now has a similar cut around her eye to Champion. Hers seems to already be healing.  Champions also healed very quickly. 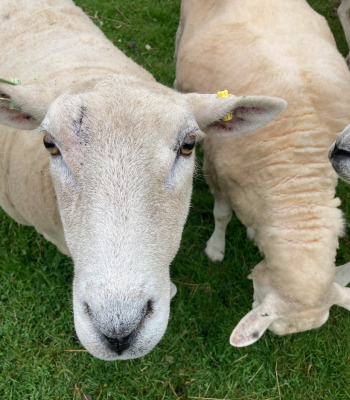 This is the first year we’ve had cut heads.

Kangaroo has a bit of wool on her chest which we will tidy up with the hand shears. Of all the sheep she liked shearing the least and tried to jump out of the pen. She likes being shorn with the hand shears and will just stand still for you so we will remember that for next year and do her with Champion. 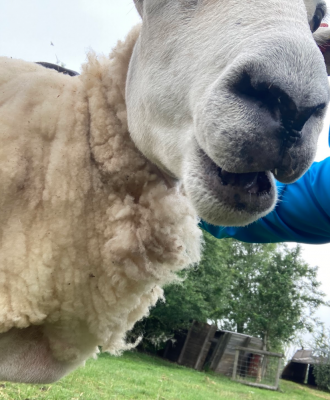 Baby Lamb and Chubby both have sore feet – nothing apparently wrong so it might be scald. It’s a bacterial infection often arising when it’s wet underfoot so they have both had their feet sprayed. 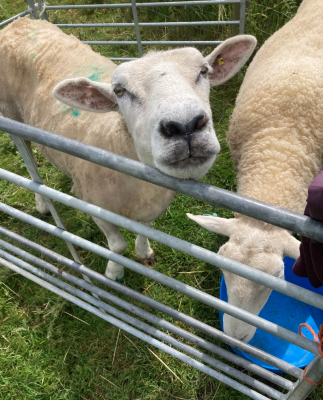 Today the shearers came to do the main flock. It was an 8am start. The sheep were put in the barn overnight so they were dry and ready. 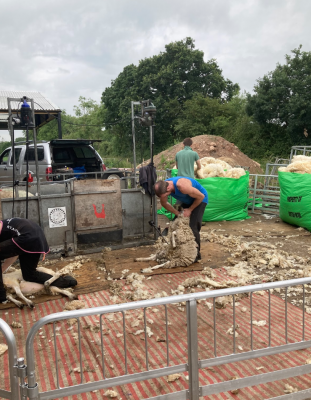 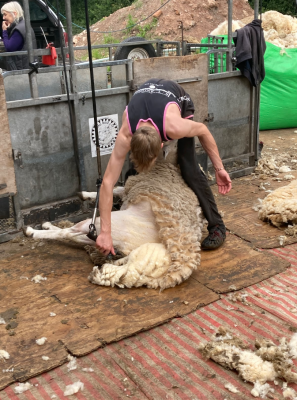 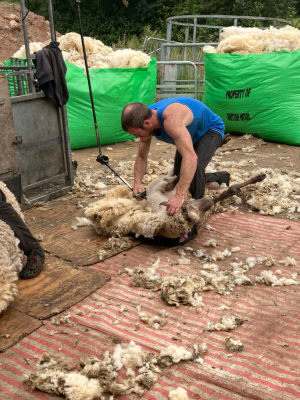 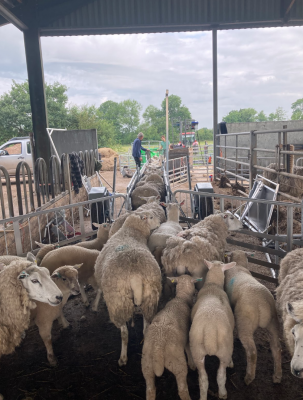 The Bowen technique means you hold the sheep in place with your legs and knees leaving your hands free for the clippers and you use your second hand to pull the skin tight. The less wrinkles in the skin the less chance the sheep will get cut.

Only the ewes were shorn. It takes about 2-3 minutes per sheep.

The wool gets rolled up (inside out) like a sleeping bag and sent off where it is graded. Each fleece earns only about 75p. The shearers charge about £1.65 per sheep. 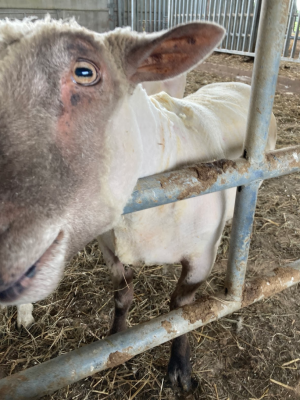 There is a small flock of hogs (lambs over 1 year old) that never got up to weight and they were living in the barn with one of the rams (who did not perform well this year).

After shearing they were let out into the gallop – the grass will do them good. But not before Jill had adopted two of them.  One of them was Dopey – for those of you that remember Dopey and Sonic from last year. 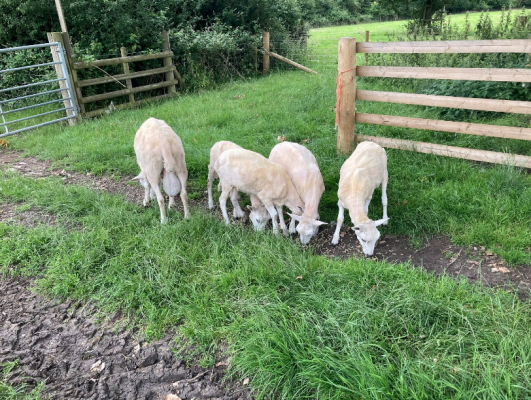 Dopey and his friend were very underweight and quite tame so we will keep you updated of their progress.

Dopey and Sarge are doing well at Jill’s although they have been separated from the rest of the flock. There is a certain amount of head butting and similar as your place in the flock is established and they really are not strong enough for that just yet. 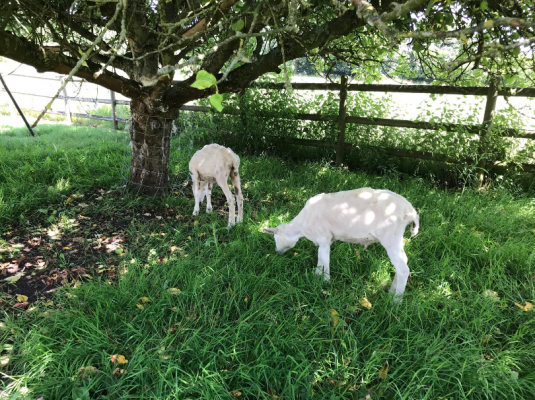 Feeling hot and bothered by flies the sheep take cover where they can. 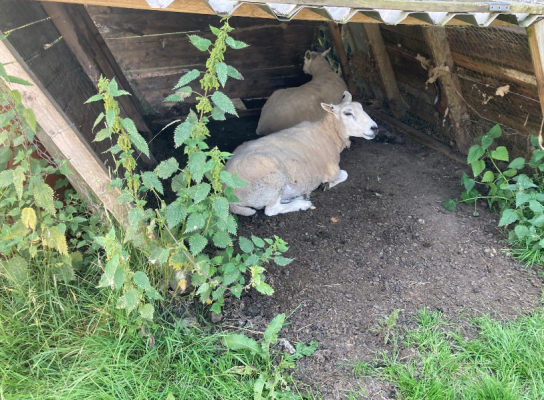 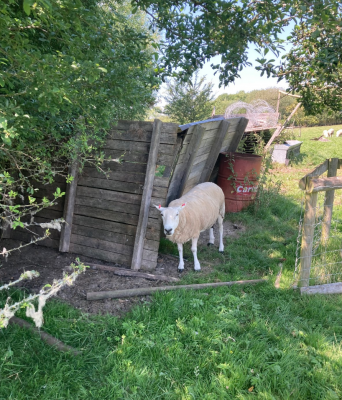 Baby Lamb and Chubby are still limping so we treated their feet again. 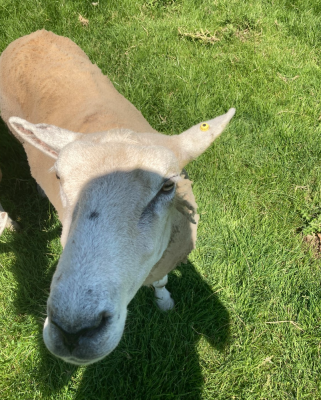 885 seems to be back in head butt mode. It happens every year for a few weeks. If you are not stroking him he’s getting ready to charge. It does mean you have to have ready access out of the field or a means of escape. It caught me unawares today and I spent an eventful few minutes running around a tree to see if he’d back off. It was like an awful game of tag.  No such luck so there was nothing else for it – I had to make a dash for the fence and hope to beat him. Just. 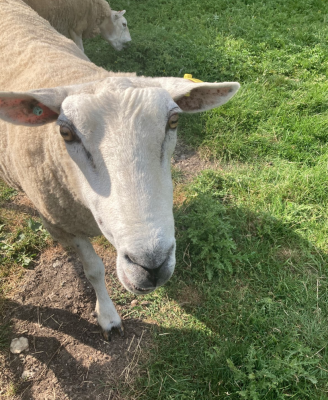 We are now down to 5 guinea fowl. 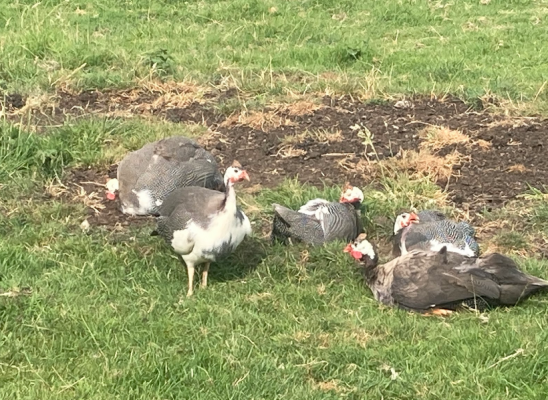 They were enjoying sun bathing in the sheep’s field yesterday.

News from the main flock

The sheep are enjoying being in the field by the barn it means they can take cover whenever it is too hot or raining. Though we haven’t he much rain for days.

We noticed this Skinny Minnie a couple of days ago and gave her some pellets. She has now become a regular., 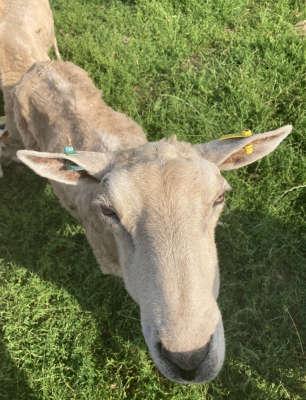 This ewe surely hasn’t lambed yet or perhaps had Skinny’s share. 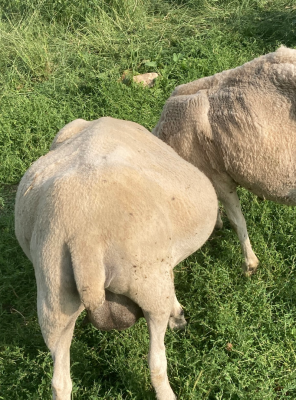 And 1984 (Georgia as she has been named) is still as soppy as ever. 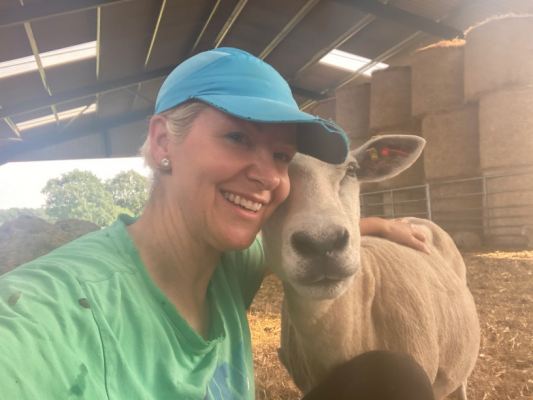